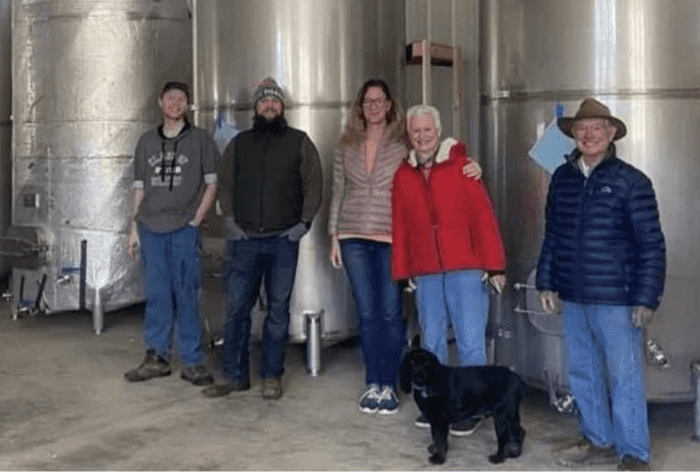 CLINTON — The grapes in her vineyard and the orange flowers outside her winery’s entrance point to one of Dorothy O’Brien’s passions.

“My main interest is growing things,” says O’Brien, an attorney who over the past 25 years has honed her growing skills as the CEO of Wide River Winery, north of Clinton.

That same skill holds true in regard to the growth of the winery’s production area that will double what the winery now produces when the under-construction 42,000-square-foot expansion is finished by the end of the year.

“We had gotten so crowded in here,” she says, “I think we were sort of overusing the space.”

Ground was broken in June on the northern side of the building to begin construction of the 40-foot-by-88-foot insulated steel addition. O’Brien says they are $300,000 into the project and aren’t finished yet. After some supply chain delays, contractors finished just a week ago, leaving the work of a plumber and an electrician remaining.

Inside the new area sits a grape harvester, a grape press, and four large tanks lining the west wall. Though not brand new, they are new to O’Brien’s winery. Already, they are full of Niagara grapes, bought from Michigan and which are mostly used in the production of her Double Jeopardy wine.

In the past, they’d usually order just one truck holding 21 tons of the grapes.

With these new tanks, the winery’s capacity to produce 3,200 gallons of wine at a time is now twice that amount, equivalent to 30,000 bottles.

Several bins placed inside the expansion area each hold a ton of grapes, the last batches of the season creating an aroma of wine that wafts throughout the building.

In addition to drastically increasing the number of bottles these grapes will make, the winery has also expanded packaging options to include portable kegs and canned wine. Selections such as Double Bubble Jeopardy, So Sue Me Sue, and Harvest Hurrah sell for $7 each or a four-pack for $20.

O’Brien first began growing grapes and making wine in 1997, learning how to do so mostly through Extension classes. The front 40-foot-by-60-foot part of the building at 1776 E. Deer Creek Road, where the winery began in 2005, originally was a workshop for her husband, Charlie Pelton. The winery eclipsed the farm in terms of revenue, though, he says, so he moved his shop to a different location. In 2011, the first expansion of the building resulted in the production area on the western side of the structure.

Since then, daughter and Chief of Operations Liz Quinn says, Wide River Winery places fifth out of over 100 wineries in the state in terms of sales. Sales and production, in fact, are currently at 85,000 bottles per year that can be found at over 100 retailers throughout Iowa and Illinois..

The grapevines covering 12 1/2 acres of land were obtained mostly from suppliers in Vermont and Minnesota. O’Brien says they “completely explode” each spring.

O’Brien says there will probably be new wines created in the near future, and a brand new variety of grape, called Louise Swenson, has been planted in the fields.

O’Brien says they’re “somewhere between totally confident and scared out of our minds” about the expansion.

Pelton, though, smiles easily and says: “It’s been a wonderful adventure.”